Here you can check out articles and reviews about interesting and rare cute toys! 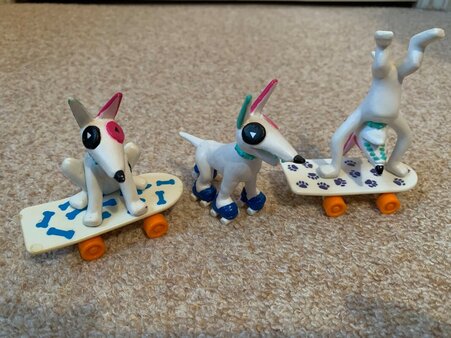 A blast from the 80s past, these neat little Rude Dog figures were made by Applause for Sun Sportswear Inc.
Rude Dog and the Dweebs was a short running cartoon show back in the 80s, that was made to promote a line of clothing of the same name. The story focused around Rude Dog and his band of mottley (muttley lol) dog buddies, the Dweebs. The Dweebs were like regular dogs only not as smart! Rude Dog ran a delivery service from his garage and the Dweebs lived with him, having originally been rescued from the dog catcher by Rude Dog. Check out my totally rad Rude Dog fan site, Rude Dog Delta if you want to find out more about the show! 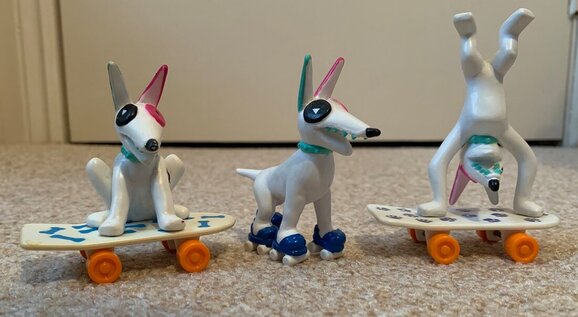 Anyway, these cute little figures all feature Rude Dog in various poses. A couple on skateboards and one on roller skates. I’m not sure if they made any more than just these three but I haven’t seen any more of them yet so to my knowledge, this is the complete collection. 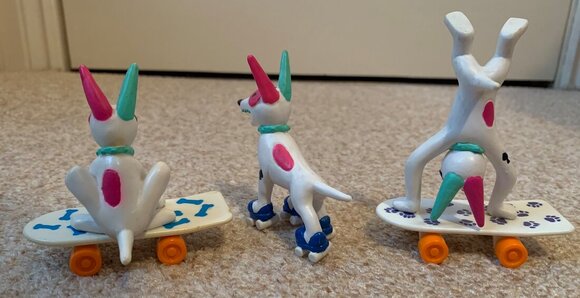 Each figure is around 3 inches tall and made from hard plastic. The wheels on the skateboards turn, although the wheels on the roller skates do not. They are nicely painted, though the colours on his ears are the wrong way round on all three. Rude Dog’s left eye is pink but his right ear is pink as well, not the left ear as with these. Nevertheless, they are a nice addition to any collection of pretty rare vintage mini figures. These have “Rude Dog TM”, “(C) Sun Sportswear Inc.”, “Licenced by Applause Licencing”, “APPLAUSE TM”, “China” on the bottom.
-Lara Ryan 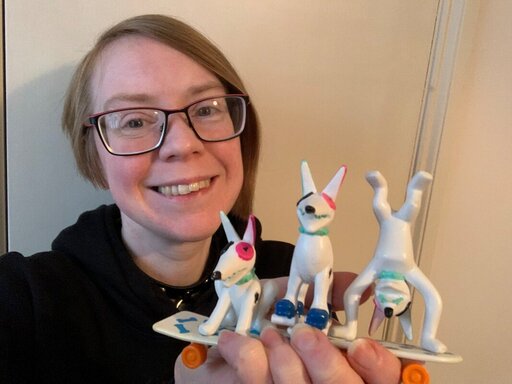 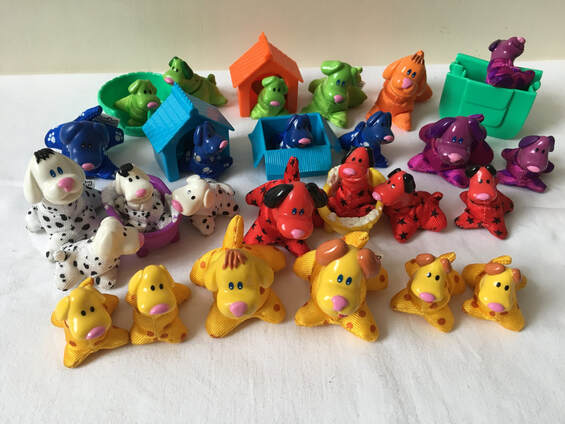 Back in 1996, Bluebird toys made these odd little bean bag bodied, rubber headed dog figures. They seem to have only been released in the UK, which is why it’s hard to find any information on them. I only have the info I do because I have one of the backing cards from a pack of them I bought back in the day.
Bluebird, founded in 1980 in the UK, are famous for making Polly Pocket, among other toy ranges, as well as inventing the plastic lunchbox (some of you might remember that from your childhood!) and were bought out by US toy giant Mattel in 1998.
Huggy Pups don’t seem to have had a long run, hence the difficulty finding out much about them. I’m lucky enough to have collected what I think is the whole set, plus a mother dog that I sent in for with a coupon from the back of a box. The mother dog was said to be a “uniquely shaped mum dog” and the uniqueness is that her body is a bit longer than the regular dogs.
The sets of dogs came as families. A mum and two puppies, plus an accessory in each pack. You also got an extra puppy to swap with friends. The accessories were made of plastic and were moulded as various objects such as a satchel, basket, bath tub, box and dog kennel. You could get different colour ways of the accessories as well.
The only thing these cutely obscure figures did was their mouths would open if you squeezed their faces, enabling them to (sort of) pick things up in their mouths and it also meant the mother could pick up the babies by their tails. The writing on the back of the packaging makes them sound more exciting than they really were. You couldn’t really pose them or make them do much.
Each family of dogs had different names - Nosey and the Patch Family (purple), Cheeky and the Dalmation Family (dalmation, obviously), Perky and the Jazzy Family (green), Smiley and the Freckle Family (yellow), Bouncy and the Star Family (red) and Floppy and the Paws Family (blue).
As far as I’m aware they didn’t do any other colour ways but they did mix and match the heads of the dogs to give them more variety. I have two versions of the Freckle Family.
These have been largely lost in the annals of time, another rare toy find!
-Lara Ryan 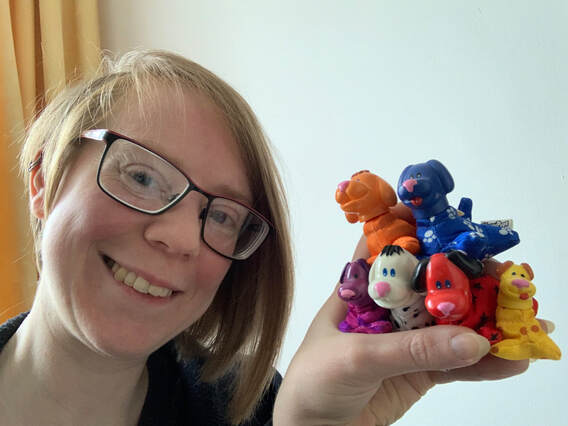 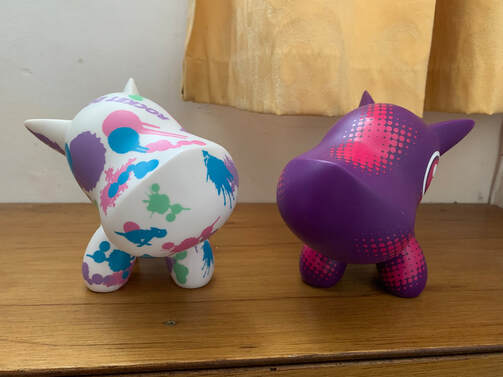 When I came across these Rocket Dog figures in a charity shop, I had no idea they would be as rare as they are. I had previously seen them in shoe stores and as far as I’m aware they are promotional “shop props” for displays of Rocket Dog brand shoes and not for sale, hence why I wanted them! They cost £1.25 each, so it was a nice bargain and I was planning to resell them on eBay, thinking that they were worth something.
However, when I got home and did a few internet searches, I found near to nothing on them. One eBay listing for the white one, where the seller was asking £10 for it and a photo of the purple and pink one on a collector website, where the person had just said they had added it to their collection.
Due to their rarity I decided to keep them! They are made from a hard plastic/vinyl, with heads you can turn and the only information I can find about who made them and when, can be found on the bottom of their feet where it says “(c) ROAR Creativity Limited 2008”, “Worldwide Rights Reserved”, an EC design number and the CE symbol. ROAR is a creative agency based in Camden Town, London and they have a website and Facebook page.
I’m not sure if they came in more colours than the two I have since I haven’t seen any around but these are certainly a neat find and a fun addition to my figure collection!
-Lara Ryan 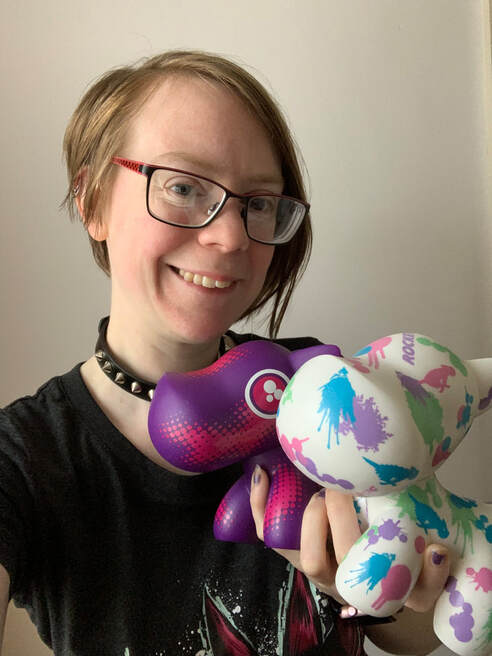