​Here you can check out some awesome interviews with musicians and rappers in the industry. 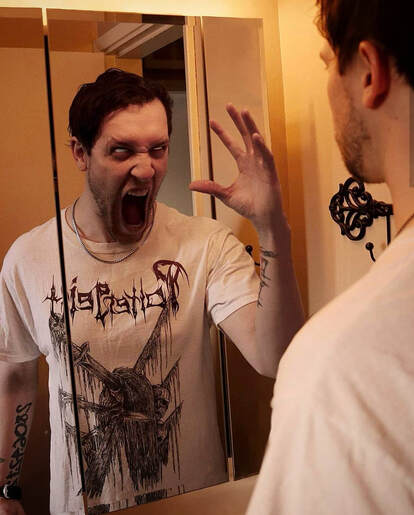 FLY- Hey Poltergeist thanks for taking the time out to speak to us!

POLTERGEIST - Anything for the horror community!

FLY- How old were you when you first starting spitting rhymes and who were your hip-hop influences?

POLTERGEIST - Honestly, I only started rapping seriously about 4 years ago. I've been playing guitar most of my life so rap as a genre is still fairly fresh to me. Obviously, growing up a white kid in the 90's, Eminem and D12 were pretty much it for me. I decided I wanted to start rapping after my good friends Razorwire and Nicc Obscene had been doing it for a while and they showed me Season Of Da Siccness by Brotha Lynch Hung. That album is why I rap.

FLY- In your eyes what is the essential rap album of all time?

POLTERGEIST - That's hard to say because everyone is going to be into different styles and there are so many out there. But, in MY eyes, The Coathanga Strangla by Brotha Lynch.

FLY- With so much horror inspiration in your lyrics would you consider your sound Horrorcore or is that term just plain lazy? 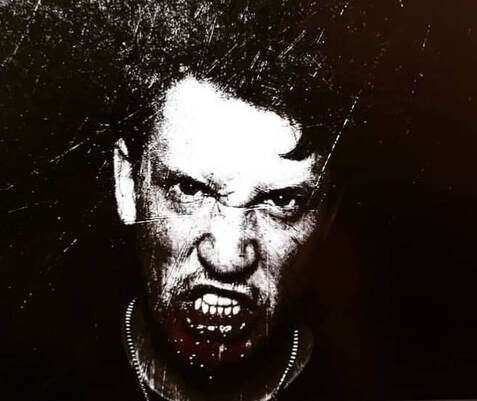 POLTERGEIST - It's Horrorcore in the strictest sense. In my first album Keep It PG, I was so new to writing Rap and had no idea what my style was but I feel the most comfortable writing horror. I still have some non-Horrorcore songs coming up but don't even listen to those ones.

FLY- You are part of a group of rappers named Obscene Division how did that come about? 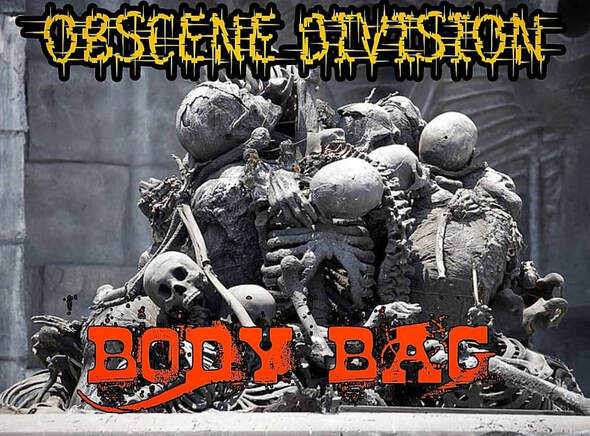 POLTERGEIST - I'm originally from Newfoundland (It's in Canada ;) but Razorwire was the first person I'd actually met when I moved to Alberta (also in Canada ;) him and Nicc used to rap in Razor's garage and we would get trashed. You know, like the cool kids don't. Back then, we were called KSW (Keep Shit Wicked), I tried out a few names for myself like Lord Slug and Pagemaster. I am a child, I know. Nicc also went by SaintOne back then so you can catch some references in our old mixtape stuff.

FLY- In the past you've done shows with the mighty Tech N9ne, how was that? Any fresh tour stories you can share with us?

POLTERGEIST - I've shared the stage with Tech and Krizz a few times now and yes, they really are some amazing performers. Very professional, very organized, very down-to-earth. Krizz bought OD shots one night, even though we offered to buy his. 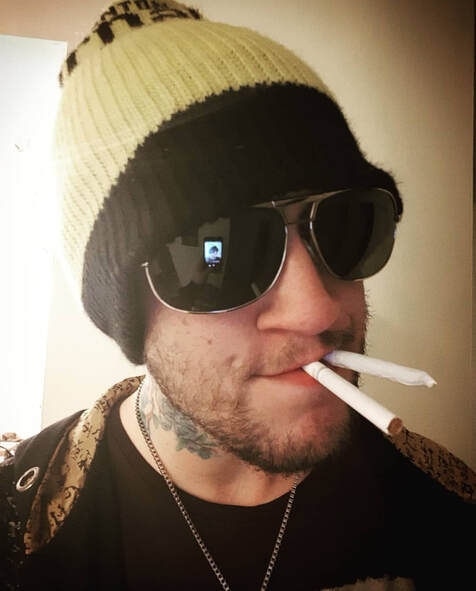 FLY- Recently you did shows with the demented duo 'Twiztid' I've been down with them since 1998! How was this experience, any plans for a track together and what are your feelings on Juggalos?

POLTERGEIST - Another couple of really solid performers. Their stamina on stage is unreal. I have to give credit to the whole band because the drummer killed it all night! It would be insane to get a track with these guys and maybe in the future, but right now I'm just some dude who watches a lot of movies and writes crazy raps. As for the Juggalos, they've always been cool to me. Some of my best friends are Juggalos.

FLY- What are your thoughts on fellow Canadian rappers such as Madchild and Snak the Ripper?

POLTERGEIST - Those guys both just played separate shows in Edmonton LAST NIGHT and I missed both. In my opinion, right now, I think Junk, Merkules and Doom Squad are the dudes but there's so many great ones, even just in my city. Brothers Grim, K-Blitz, Psych Ward Kidz, JReds, look us up! #YEGMUSIC 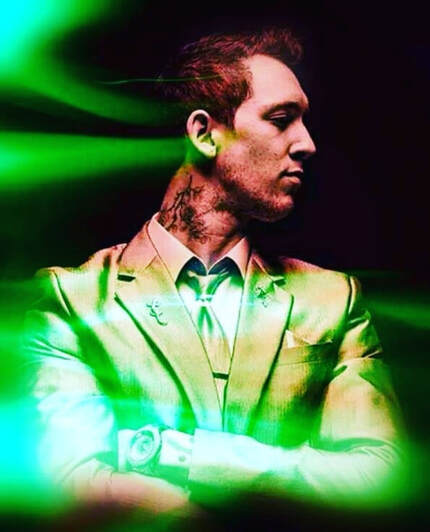 FLY- As well as hip-hop you are also a huge metal head which bands do you consider the greatest?

POLTERGEIST - Opeth, Between The Buried And Me, Necrophagist, Origin, Suffocation, The Tony Danza Tapdance Extravaganza, Psycroptic, Ingested, Signs Of The Swarm, Shadow Of Intent, After The Burial, SikTh, The Dillinger Escape Plan, Abysmal Dawn, Thy Art Is Murder, Brand Of Sacrifice, Beneath The Massacre, I could go on and on and on but I'll stop there.

FLY- Are there any rappers or bands that you would love to collaborate with on a track?

POLTERGEIST - Brotha Lynch Hung, Jarren Benton, Prof, Merkules, Tech N9ne, Ces Cru, any of the bands I just mentioned but obviously, that's a little far fetched for rap. Again, I could go on so what I'm saying is I love collaborating with other musicians. 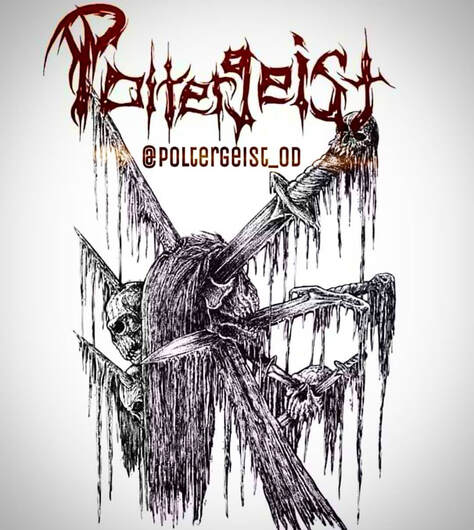 FLY- What toys did you collect as a nipper (kid)?

POLTERGEIST - I was definitely hard into Pokemon and Dragonball Z. I had a ton of Tech Decks because I'm very, very cool. I collect mostly horror memorabilia now but I've been looking into grabbing a bunch of McDonald's toys from the 90's still in those plastic packages.

FLY- You are a massive horror fan as evidential in your name at what age did you discover horror flicks? 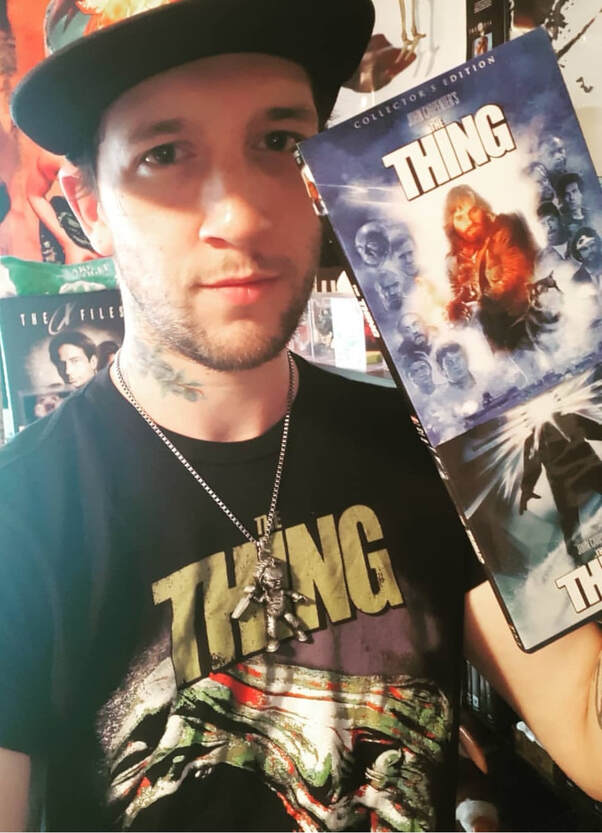 POLTERGEIST - My dad showed me Stephen King's IT when I was like 6 years old because he's a good father. I was lucky enough to understand that it was all fake and immediately became obsessed. I would go to the local video store in Carbonear, NFLD and just stare at the horror section.

FLY- My Dad introduced me to American Werewolf in London! I also used to do that very same thing of staring at the covers of horror VHS rentals!
In one of your lyrics you make it clear that you are not a fan of the 'Poltergeist' remake, what factors do you feel made it such a failure?

POLTERGEIST - I was mostly just being a dick but, to me, it seemed extremely unmemorable. Maybe I'll give it another chance. Elitism is hard to shake when you've delved so far into genre work in your younger years.

FLY- If you were forced to watch either indie or mainstream horror for the rest of your days, which would you choose and why?

POLTERGEIST - Clearly underground horror is where it's at but that also depends on what we classify as mainstream. I'm gonna stick with underground.

FLY- In your track 'Michael' you rap from the perspective of the Shape from 'Halloween', are there any other horror icons you'll be taking on musically in the future? 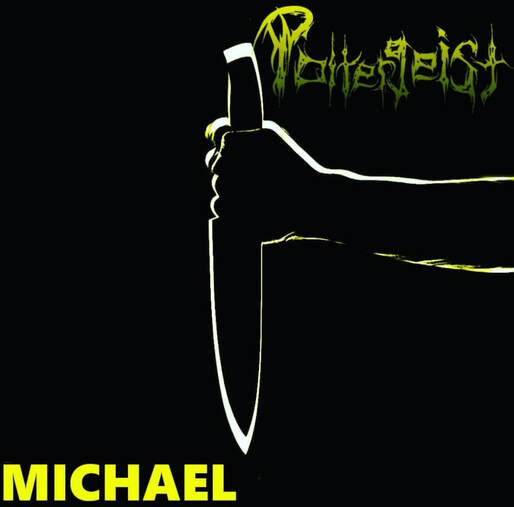 POLTERGEIST - I WANT TO DO THEM ALL. Ok, so next up is Norman Bates, The Tall Man, Gremlins, the Mars Attacks aliens, Freddy, Pinhead, Leatherface.. I'll leave it at that. There are so, SO many more...

FLY- What were your thoughts on the most recent 'Halloween' flick do you consider it a worthy sequel?

POLTERGEIST - I'm going to have to watch it again. I was getting wasted in the theater and hardly remember it at all. I have a tendency to not pay much attention when I watch a remake. I just realized that.

FLY- You are a big fan of old school horror but is there any modern movies that have recently blown your mind?

POLTERGEIST - Lots! The Void, The Endless, The Autopsy Of Jane Doe, Don't Breathe, Dread, Hereditary, Shrooms, Replace, The Witch, Sinister, Martyrs, Ghost Ship, Eden Lake, American Mary, Behind The Mask, Slither, Dude Bro Party Massacre III, the Maniac remake with Elijah Wood.
That's just off the top of my head and I'm not sure how far back you can go for the title "Modern".

FLY- All great movies there Homie, I thought 'Mandy' was a superb recent one!
I know you have a great section of horror collectables at your house, what is the ultimate item in your collection? 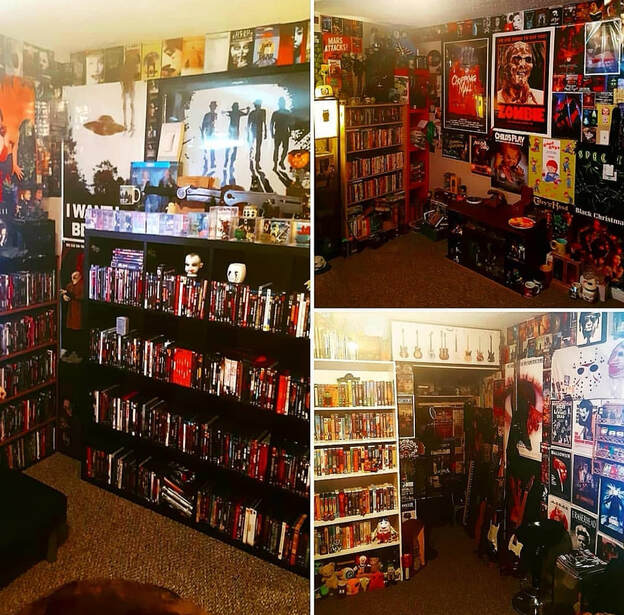 POLTERGEIST - I have a custom Belial from Basket Case with glow-in-the-dark fingernails and a Sideshow Nosferatu figure which I cherish. Not the most "collectible" things I have but they're definitely the ones I could never let go of.

FLY- You've made two tracks based on 90's favourites; the Goosebumps series, that decade was full of fun creepy cartoons and spooky shows, which others hold a special place in your heart?

POLTERGEIST - Well, Obscene Division has an Are You Afraid Of The Dark track in the works and we've talked about doing one for Freaky Stories. I'm about to bring y'all way back wit these.. Grizzly Tales For Gruesome Kids, Tales From The Cryptkeeper, The Grim Adventures Of Bill And Mandy, Courage The Cowardly Dog, Mona The Vampire, Monster By Mistake, Big Werewolf On Campus, Buffy The Vampire Slayer (of course), Tales From The Darkside, The Outer Limits.. 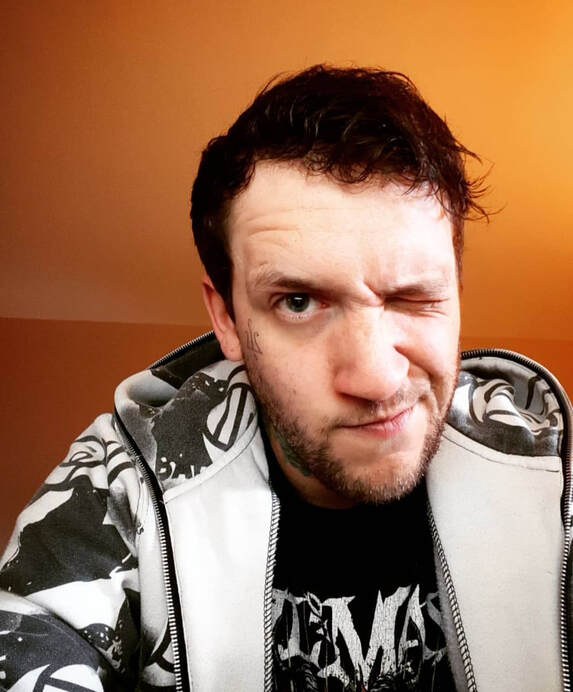 FLY- Any plans to do an 'Aaahh!!! Real Monsters' song? You spitting lyrics as Ickis would be dope!

POLTERGEIST - I haven't thought about doing that show but it would be really cool. I think you know who Razorwire is going to choose to be ;)

FLY- Here at Fly in Your eye we absolutely love cats and know you have a massive moggy yourself, please tell us a bit about your hairy pal! 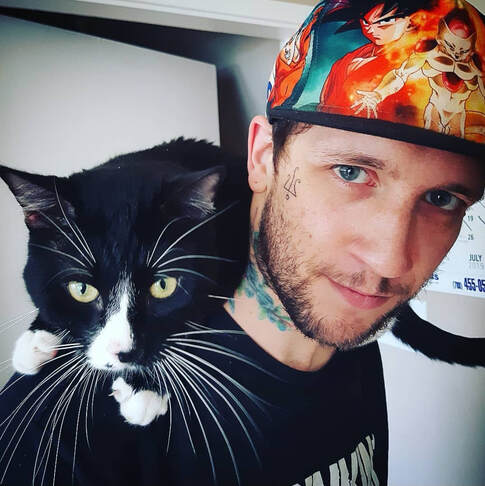 POLTERGEIST - I have two black cats. They're twin brothers. One's name is Church (Pet Sematary), the other is Binx (Hocus Pocus). They're little demons but they're fun. Church just jumped on me and had to smell my breath. It's weird, he gets right in your face and has to smell your mouth. Demons.

FLY- So what's next on the "Tarot" cards for Poltergeist?

POLTERGEIST - Well, I'm doing the 8 Bars To Die For series now which is a monthly Horrorcore cypher series hosted by yours truly. Myself and 3 other rappers spit 8 bars of content not suitable for children. The title is based off the Afterdark Horror festival 8 Films To Die For, which I'm a big fan of. Other than that, I'm constantly writing and taking notes. Hit me up on Instagram and recommend some characters or movies you'd like to hear me rap about!

FLY- Lastly any contemporary indie musicians and creative types you'd like to recommend to us at Fly in Your Eye and that the world at large really need to check out?

POLTERGEIST- Oh, lawdy! There are so many. I've already mentioned a bunch of Metal bands and rappers I'm into so let's go with some different stuff.. (So everyone knows I don't ONLY listen to Rap and Metal)
Porcupine Tree, This Town Needs Guns, Hot Action Cop, The Gathering, The Stranglers, Three (search for The End Is Begun), The John Butler Trio, Katatonia, The Dead South, Tame Impala, Xavier Rudd, Sol Seppy, Faith No More, Mr. Bungle, Incubus, First Aid Kit, Abandoned Pools (they did the Clone High theme), God Is An Astronaut, Animals As Leaders, The Ink Spots, I know everyone knows them but listen to more Bloodhound Gang, Psychostick, Cirith Ungol, The Brazilian Girls, Shakey Graves, Raisi K The Raisin Man (video game beats!), Tower Of Power, Reverie Sound Review, I'm sure there's a hundred more I could mention but I'll stop there.

FLY- Thanks for speaking to us Brother, always a pleasure chatting with you! Much Positivity and Many Buzzing Blessings from myself and The Fly in Your Eye family. Will 👊🏿💀 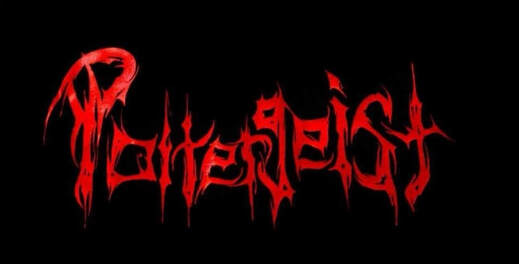 POLTERGEIST - Thanks for reading and you can follow me here:

I'm also on Spotify, YouTube, SoundCloud, Google Play, iTunes, Amazon Music, pretty much anywhere you can buy, download or stream music. I'm the idiot who went with the name Poltergeist so I have to point out to search Poltergeist OD and you should be able to find me. If not, don't even worry about it. My raps are really mean. 👻